Somewhere to discuss things that don't fit into other categories.

On the day of the election, he remembered that he was a Liberal and voted for himself...
Top

All mercedes 0305 ex-obahn buses sound good, IMO, no matter what age they are

Lol, you should have heard R565 at 100. The high pitch of the noise of the engine was unbelievable. Fortunately, I didn't get any damage to my hearing when recording it.
Top

The de-wogged comment made me draw a connection between Mao Zedong telling younger people that their parents embodied the old ideas (Bad) and encouraged them to rebel against, humiliate and in extreme cases kill their parents...

I can't believe this was in 1996 and to the extent people supported One Nation...

"Where the hell do I go"

Please explain for 2nd+ generations of people whose parents/grandparents were Asian Migrants?

Some of the things she has said are just plain stupid too, and from what we know:
1) She only received formal education up until 15 years old
2) She's not that articulate (has got better over the years), Speeches were written by people
3) Authorised for her name to be put down as author for a few works

In some instances she clearly has no idea on what she is saying and it all looks like signs of exploitation, ie. people using her as a puppet.

SSO: In your maiden speech, [then adviser] John Pasquarelli included the word “homos-xual” when making reference to the taxpayer-funded money people unfairly received from the Government. Why did you decide to leave that out?

Pauline Hanson: Because I said to him, “John, what are you talking about?” He said, “Everyone knows about this.” It wasn’t true and I didn’t believe it, so I took it out. I don’t need to put something in the speech for publicity.

ANDREW DENTON: Many people took your comments to mean other things. In that first six months between being elected member for Oxley and your maiden speech, over that time you said, amongst other things, we're in danger of being swamped by Asians, that we should cease all immigrations, that Aborigines were not more disadvantaged than white people, and that you would represent those in your electorate except Aboriginals and Torres Strait Islanders. Now, I'm going to show you something from a now-defunct program on Channel Seven called 'Witness'. This is a young Asian girl reading a letter she got as a direct result of people who were taking what you were saying and expressing their attitude to her.

WOMAN: "You are nothing but an ungrateful, treacherous, yellow slanty-eyed little Vietnamese whore. You have... We have had enough of your lot with their drug peddling and crime. So piss off now."


ANDREW DENTON: Were you aware of the impact of what you were saying, whatever you meant, was having on many people's lives?


In 1997, at the height of her popularity, Hanson published a volume entitled Pauline Hanson’s The Truth, a strange title, since she didn’t actually write it and it wasn’t exactly true: you might recall the warning about how an Asianised Australia would soon be ruled by a lesbian cyborg called Poona Li Hung. But beneath all its craziness, the book’s sentiment was entirely genuine: it expressed, in distilled form, the rage and confusion of those left behind by the economic reforms of the Hawke-Keating years, people whose lives had been transformed without their consent, and by forces they didn’t understand.

Bus operators used rap to teach bus safety to kids for more than 20 years. Some Australian and international examples.

https://www.youtube.com/watch?v=jxbXOMkBImc (might appeal to bus drivers)
Are you being served? Service aspects of public transport in Melbourne http://melbourneontransit.blogspot.com & MelbOnTransit on Twitter.
Top

A little something I put together tonight...

These were stuck on/near the bus stop outside Leumeah Station on the East Side... Don't watch her videos, or add her if you don't want to risk losing any brain cells! 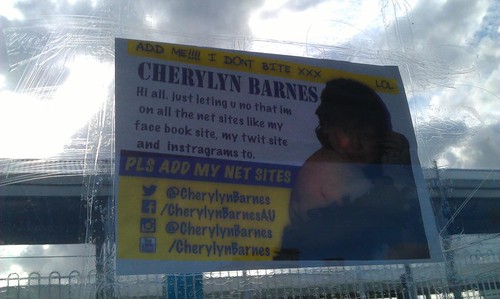 I love this because it's so Australian:

The Thai smoking one's my favourite.
Are you being served? Service aspects of public transport in Melbourne http://melbourneontransit.blogspot.com & MelbOnTransit on Twitter.
Top

Buses of Brisbane and Outer Suburbs.

A few of my vids

Canadian Pacific has their Holiday Train.

Has Pacific National, Qube, Aurizon, V/Line and any other rail operator in Australia ever thought of this? This is amazing.
#PleaseStandBy
Top

One of the best sounding Southlink L94UBs at 100.

Here is some footage i got at the small wondabyne station on the central coast line.

Another one I've recorded recently is Sutherland during some minor track work, where the Y sets are seen going through platform no.3.

Another one of my latest videos with Steam locomotives 3237 and 3642 passing Woy Woy and Mt Kuring-Gai on their way up to Steamfest in Maitland.

https://www.youtube.com/watch?v=WNEbDSPFSsI
Are you being served? Service aspects of public transport in Melbourne http://melbourneontransit.blogspot.com & MelbOnTransit on Twitter.
Top

Taking the bus from Curtin Uni to see kangaroos on Heiresson Island.

Return to “The Lunch Room”